There's something I like about the simplicity of groups in Carcosa; 182 Skittles men X alignment led by Level Y fighter. Figure out what it means. You can insert anything, make anything out of it. That gets hard to do for an entire hexmap of generic faceless dudes.

Having even just one thing to go on can help relieve the pressure. One symbol, one norm, one part of who these people are, what they care about, what gets them going, and you can spin out a whole set of cultural expectations from that.

If you're into anthropology you can hack together customs, history, or folktales from cultures of our world into tables. Bits and pieces from Mongolia, Ukraine, China. I'm working on making a book of these for ease of use. I hate prepping stuff ahead of time and prefer to do most of my heavy lifting at the table.

Don't bother adding cultural nuances unless there's a possibility for the PCs gaining an edge for manipulating the populace, or escaping their wrath. There's no point in having interesting cultural markers if they aren't manipulable in some way. 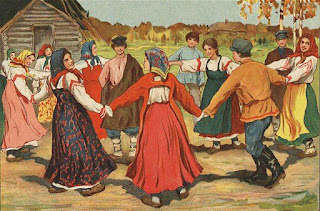 Large towns like the adventurer's hovel Darkstone and the grand city of the Byzantium are relatively immune to destabilization due to diverse ecosystem of ideas which intersect in such places. Though these larger congregations may have a main cultural identity they are generally more tolerant of alternative points of view due to the necessities of more complex relationships. Small out of the way burghs and hamlet are more susceptible to the corrupting power of fresh ideas, because the backwards and inbred mentality of small minds, ignorance, and echo chambers, or traditional ways of life requiring certain mindset to keep viability of the group intact.

Start with the dominant cultural feature of the location. This can be a custom or ritual (such as men wearing large frilly hats, ritual bodypainting, or washing your hands before opening doors), a religious practices (such as a certain moon being the time or virgin sacrifices, or fasts and meditations enjoined upon the end of the month), etc....clothes, food, architecture, dialects, castes, superstitions, omens, weather, plants, anything can have crazy taboos attached........If you know one thing about this culture you can explode it's importance to be archetypal of the culture as a whole. 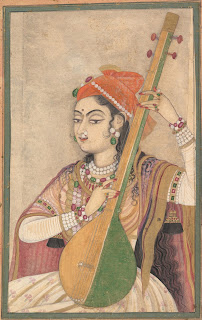 They worship red dragons. Everything is red dragons. Their leader is the great dragon. Their houses are painted red. The color blue is evil to them. Every full moon the whole town gets together in a wild party where they burn the richest members of their society in a giant wicker dragon and redistribute their wealth.

They fear minotaurs. The town is built on top of a buried labyrinth. Circles are evil to them. Their houses are open air lofts. At night the leaders of the village dress in bull masks and terrorize the town.

They worship a particular crag of rock. It's shaped like an old woman, the founder of the town. When the villagers commit a wrongdoing they have to go admit it to the rock. The old woman comes to them in their sleep and gives them visions. The visions are considered true and they will go to great lengths to make sure those visions are carried out.

Find a table. Roll on the table. The village worships that thing. Steal a dungeon from somewhere, fill it with references to that thing, make it a taboo place nearby.

Here's a great Abulafia generator for bozo customs. Its pretty much the only thing you'll need until I finish my book on procedural cultural generation. Each town roll a number for the populace, their wealth, their profession, their technological level, what they have for sale, a few rumors they know, and their custom. Done. Maybe the whole thing can be done off a single dice throw if you're crazy.

Every culture has a morale score for how fragile their society is. Generally the more central to their existence the custom, the more taboo. If you don't know you can throw 2d6 or d10 (depending on how swingy you like things) then throw against it on a 2d6 everytime the PCs do something offensive, just like a morale check. If the citizens go over that means they go fucking berzerk and try to run the PCs out of town, burn them at the stake, eat their hearts, bury them alive, throw them in the serpent pit, feed their minds to the god in the spaceship, whatever it is they do to heretics. This gives the party the opportunity to run away cackling like Cugel or butcher the whole town like Conan. 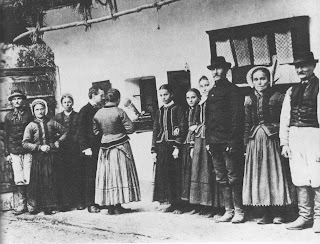 Probably within a town there will be progressives or wingnuts who hate the old order and want to see it upended. Conversely, there may be extremists who consider their fellow townspeople to be lackadaisically backsliding into corruption of the old ways, thus risking angering the gods. These buffoons are a wonderful resource for smart players to exploit and should be played up at all costs. 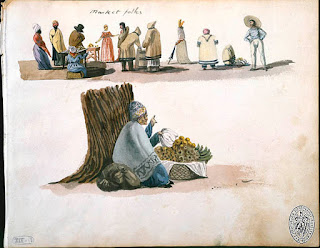 The exercise of futility: d101 taboos & cultural beliefs
1. Worship a magical item
2. Feed prisoners to a pit
3. Ritual combat each full moon
4. Vomit in presence of elders
5. Only consume certain foods at certain hours
5. Cannot eat in front of particular group
6. Scientific inquiry and total objectivity required for all actions
7. Must constantly narrate inner monologue
8. Lying punishable by disfigurement
9. Must chop off finger to enter town
10. Ritual cannibalism
11. Kill everyone over age of 25
12. Must speak through facial cloth
13. Lower classes completely ignored
14.  Fantasy racism towards bad haircuts
15. The music must continue lest the Thing awakens!
16. Never pass through a crossroads at night.
17. The squeals of a fox are foul magick
18. Never let the last full moon of the year fall on a new born baby
19. Certain colors or objects associated with death
20. Actions or words related to disease
21. Making eye contact = challenge
22. Giving gifts is offensive
23. Compatibility of astrological signs prime importance
24. Bodily function must be used when speaking the name of the dead
25. Morning prayers during rising of sun
26. certain garments or actions must be performed during intercourse
27. certain actions performed before eating
28. Those who die have their name abolished from the language, or changed to that of an animal
29. All <person type> must keep a shaved head
30. Apologies invalid without geas or bodily mutilation
31. Ill treatment of servents expected
32. Proscription against killing
33. Proscription against looking at ugly things
34. Proscruption against starting fires; only may take fire from ever-burning pyre held by vestal virgins
35. All warriors are eunichs; sex organs considered sinful. Removal is purifying.
36. Outsiders must be burned with brand to be purified
37. Those who approach from a certain direction are tainted
38. Cannot cross barrier of a certain color string
39. Human saliva considered poisonous
40. Laughter brings evil spirits
41. Innocence proven by game of William Tell
42. Ritual of initiation insanely deadly (wandering in desert, entering dungeon, crossing lava stream)
43. Sorcery of utmost evil. Have insane forms of detection
44. Certain animals/creatures, if killed, would haunt killer from spirit realm
45. Cannot cross bodies of water at certain times
46. Outsiders beatens on certain days
47. Guests must sleep in haunted cavern
48. Breath is considered sacred; must be collected
49. Those who accept gifts bonded into slavery
50. Boys sent away to become pirates on 13th birthday
51. All infants born without hair left to die in jungle
52. Proscription against cutting body hair/showing skin
53. Houses swept of disease/dust every day
54. Dead left to putrify where they died
55. Never throw out trash until new year
56. Certain day of year castes switch places
57. All references to time taboo
58. All snakes must be killed
59. Urine collected to be sprayed on crops
60. All disagreements result in ritual combat
61. Musical instruments aid in vocal communication
62. Unending torrents of insult; anger warrents death penalty
63. No bad feelings. Ever.
64. Incapable of lying or bending truth
65. Fancy hat = social status
66. Weapons indoors bring bad luck
67. Inability to cast magic taboo; complex system of tricks for artificial pestidigitation
68. Son kills his father after being married
69. May only walk on stones set for the path
70. Everybody shares everything; permission unnecessary
71. Trees cannot be cut down
72. Extreme carnifaction
73. Consumption of putrid flesh to abolish desire
74. Cats are evil
75. Everything decorated with complex evil eye pattern
76. Belief that life of cruelty leads to rebirth as minor demons which terrorize chilren
78. Overworked carpenter builds taller and taller scaffolds for the most valorous to hang themselves
79. Feet touching the ground damns the dead
80. Trying to out-do each other with tall shoes
81. Childbirth unclean; citizen reproduce by clones
82. Physical body unclean; citizens in process of uploading consciousness to supercomputer
83. Use drugs to stay constantly in torpor, dream world considered more real than this one
84. Farmers shunned/considered unclean for use of manure. Hermits become farmers and know lots of stuff but hate people.
85. Everything is an excuse for a party
86. Everything is an excuse to butcher an animal and examine their guts for prophecies
87. Consider the flight of birds to be a language, highest pursuit lies in recording knowledge therein
88. Local mountain shunned. Thunders loudly. Stinking wind blows from thus, putrifying crops.
89. Somebody has to be kept watching the enormous wall lest 'they' breach it
90. Life on this world is pointless because Martians are coming to take us away shortly
91. All of society bent on building tower to the moon
92. Totally shocked that the world outside their valley isn't just an illusion OR believe only in the present; evidence of things that happen prior to now are demons trying to trick us (ow my head)
93. Think themselves to be living on an elemental plane/astral world
94. Worship all things dead, like a cult of necromancy, but without the magic
95. Incapable of asking other to do anything
96. Incapable of asking questions OR making statements
97. Everything must be sung
98. Can't use hands for anything
100. City of orcs guarding chests of meaningless trinkets caught in perpetual stalemate and starving. PCs quickly realize it's not worth their time and leave
101. Pigmies make PCs their new king. They accidentally ate the last one.
Posted by unwashed mendicant at 2:00 PM

Email ThisBlogThis!Share to TwitterShare to FacebookShare to Pinterest
Labels: culture