Eat everything, aka the rule of rations 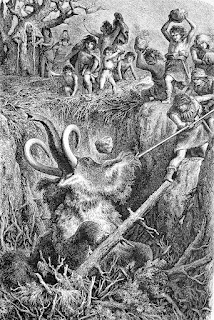 An adventurer needs about 4000 calories a day. An iron rations contains this. Meat and carbs are the most energy dense. Plants have very little in the way of calories. You can't survive wild foraging plants.

Nuts are the most realistic food source. 4000 calories of acorn meat = 2.2 pounds. Plus it takes days to soak and dry the nuts to make them edible. But they're only available for about two months of the year.

It would take 20 pounds of berries to meet an adventurer's food needs. They'd have to eat the equivalent of fifteen potatoes in wild tubers. Just forget about salad - most leaves contain less calories than it takes to digest them.

So hunting it is. How much meat is in a wild animal? 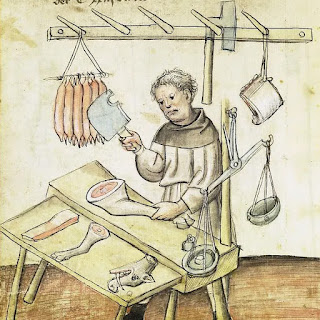 This article has a lot of great info about this subject. I get all my numbers below from it.

A deer is about 40% meat. This doesn't include the guts, which you would definitely want to eat in a survival situation. In the article they say you can get close to the live weight of the deer by multiplying the field dressed weight by 1.28 - field dressing just means taking out the organs and blood. So if you have a 125 pound field dressed you've thrown away about 35 pounds of viable food.

Okay maybe I am.

Actually this is pretty easy. You can just multiply the organ meat weight by 885 and the venison weight by 675, add them together and divide by 4000.

But who wants to do that at the table? Let's just go with 60%. That's a nice clean number for our back of the napkin calculations. 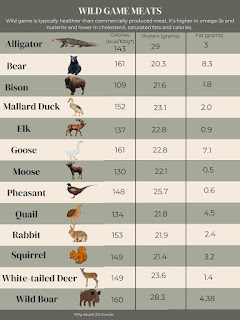 The thing is that different kinds of animals have different amount of meat on them. But we're not gonna do that, we're just gonna assume all animals follow the same ratio as deer. We actually want people to come back to our game. 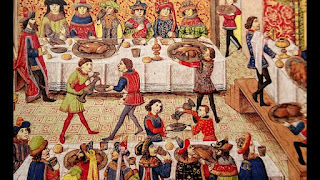 Note on snakes: you could probably get more rations out of a snake. Might double it.

You get the idea.

Do you have a faster way to calculate?

So how much do these meat rations weigh?

The magic meat number is 675 calories per pound, making a 4000 calorie fresh meat ration weigh 6 pounds. If its dried into jerky for iron rations it'll lose 2/3s its weight and be 2 pounds. Organ meats tend to lose more water but let's not be fussy.

How long does it take to butcher an animal?

It takes about 20 minutes to pluck and cut up a chicken. Rabbits are faster. It takes me about an hour to skin and butcher a deer. Several people working together on a cow might take a couple hours - we're using old fashioned bone saws at best, or knives. I estimate an hour per 500 pounds. This is mostly for palatability and for drying the meat. Nothing's stopping the party from indiscriminately hacking off chunks and roasting it.

How long does drying meat take?

You have to cut it into thin strips and hang it. That takes a long time, see above. Humidity has to be low or meat will spoil. 8-14 hours in the sun.

Ideally you salt it first. 1 day per 10 rations.

If this isn't enough for you get help

Posted by vilecultofshapes at 3:48 PM